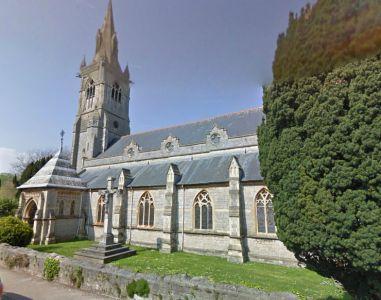 I have been given the enormous privilege of being asked by the Bishop of Exeter, the Patrons of this Parish and your representatives to be your Parish Priest. This is an honour I have had no hesitation in accepting. I guess that for most of you, you will know very little about me. So here goes...

I was born in Bristol. My parents moved to Barnstaple when I was a teenager and so I attended secondary school in North Devon. I then went to the University of York where I studied the “dismal science” of economics.

The majorityy of my working life has been spent as an accountant in health authorities or local government. Before entering ministry I was the Deputy Treasurer of Tunbridge Wells Borough Council.

My church life and experience have been pretty varied but before ordination I worshipped at St Barnabas, Tunbridge Wells where I have variously been Reader and Churchwarden. I was called to the priesthood by John, Bishop of Fulham and did my training at the South East Institute of Theological Education (SEITE).

I have served these last 3 years as a curate in St Luke’s, Kingstanding, a vibrant parish in a large council estate in Birmingham. I was lucky to be first with a very able priest, Fr Darren Smith – who is now General Secretary of the Additional Curates Society. In this last year the Parish has been in interregnum so I have been their sole priest, though we do have a Deacon, which makes me probably the only curate in the Church of England to have a curate!

My interests are reading, cricket but above all fishing whether sea fishing or fly fishing.

Oh, I almost forgot I am married to Jacqui, who works with blood in hospitals, and we have three children: Samuel, Lydia and Isabelle.

All Saints, Babbacombe – a brief history

Just over 135 years ago a young priest called John Hewitt, an assistant curate at S Marychurch, had the dream, the vision to guide the energies and enthusiasm of his congregation to create the beautiful building that you see can see today.

Building work began a few days before Christmas 1865 – the same year that ‘Alice in Wonderland’ was published. The architect chosen to design the Church was the leader of the Gothic Revival in church architecture – William Butterfield (1841 – 1900). He was a pioneer and innovator and one of the most distinguished and adventurous of all Victorian architects.

The foundation stone as laid on 20th December 1895 – sadly this stone has disappeared from view. By autumn 1867 the nave and north and south aisles were built leaving the chancel, sanctuary and tower to be completed when finances allowed. The building was consecrated on All Saints Day, Friday 1st November 1867, by the Bishop of Oxford, Samuel Wilberforce, the son of William Wilberforce who brought the slave trade to an end.

The building that was consecrated was rather different from the splendour we see today. It was a simple structure only the nave and two side aisles. It didn’t take long for the builders to finish the church – the completed structure was opened on All Saints Day, 1st November 1874.

John Hewitt’s work now began in earnest … he was to remain here as Babbacombe’s first parish priest for 44 years. When he died in 1911 at the age of 81, all the major work on the Church had been completed and All Saints had become part of Torquay’s religious and architectural life.

Butterfield had a passion for colour in his buildings – and we have lots of that here together with Butterfield’s other major characteristic – geometric patterns and design.

The church was made with much local material – local sandstone from Osbourne’s Quarry below Petitor Downs was used with Bath stone dressings. The pillars supporting the roof above the nave are formed by 5 ‘drums’ of Petitor limestone.

The church as originally built must have been very dark; we can surmise this as in 1906 a quatrefoil windows were built into the clerestory and provide much needed light into the roof space.

All Saints has some very fine Victorian and Edwardian stained glass – much of the stained glass commemorates saints – S Ceceila, S Margaret, S Faith, S Boniface of Crediton (Devon’s own saint), S Augustine, S John the Baptist and S Stephen all feature. Other windows show various biblical scenes: the Resurrection, the Annunciation and Moses striking the Rock in the desert are among the other windows.

But obviously it is the great East window that captures our attention as we enter the church. This dates from 1874 and shows Christ in majesty, surrounded by the elders in heavenly worship. This is a depiction of Revelation 4:

You are worthy, our Lord and God,
to receive glory and honour and power,
for you created all things,
and by your will they existed and were created.

The chancel and sanctuary are paved with limestone and marble and is lined with polished alabaster. Within all this wonderful stone work sits some mosaics – at the East end we have depictions of S John Chrysostom and S Peter, S Paul with S Athanasius, the work of the Venetian artist Antonio Salviati. We also have mosaics depicting S Matthew and S Mark – the opposing stained glass depicting SS Luke and John were lost during the war.

You will notice too, the seven sanctuary lamps suspended from the chancel roof – again an allusion to the fourth chapter of Revelation: in front of the throne burn seven flaming torches, which are the seven spirits of God. (4:5) This used to be thought of in terms of Isaiah’s prophecy concerning the Messiah:

However, the lamps actually symbolise God’s active presence in the world, here expressed using the imagery of the prophet Zechariah from his fifth vision of the lampstand and the olive trees:

The angel who talked to me came again … he said ‘What do you see?’ And I said I see a lampstand all of gold, with a bowl on the top of it; there are seven lamps on it, with seven lips on each of the lamps that are on top of it. … I said to the angel who talked with me, ‘What are these my Lord?’ … ‘These seven are the eyes of the Lord, which range through the whole earth.’

There is nothing to relate the lamps to Isaiah – sad though that is!

Of great importance to All Saints are the marble font and pulpit – both works of genius with elaborate cascades of polychromatic limestone and marble in arches and pillars.

Living, loving and learning forever; being the best you can be as we journey together

Unfortunately not the ones with chocolate chips.

Some cookies are necessary in order to make this website function correctly. These are set by default and whilst you can block or delete them by changing your browser settings, some functionality such as being able to log in to the website will not work if you do this. The necessary cookies set on this website are as follows:

Cookies that are not necessary to make the website work, but which enable additional functionality, can also be set. By default these cookies are disabled, but you can choose to enable them below: